I dedicate this website to my father, son and godfather.

I further dedicate this website to all the young U.S. Army soldiers who fought the largest and hardest battles of WW2.  Alive or deceased, killed in action or not, they shall never be forgotten!! 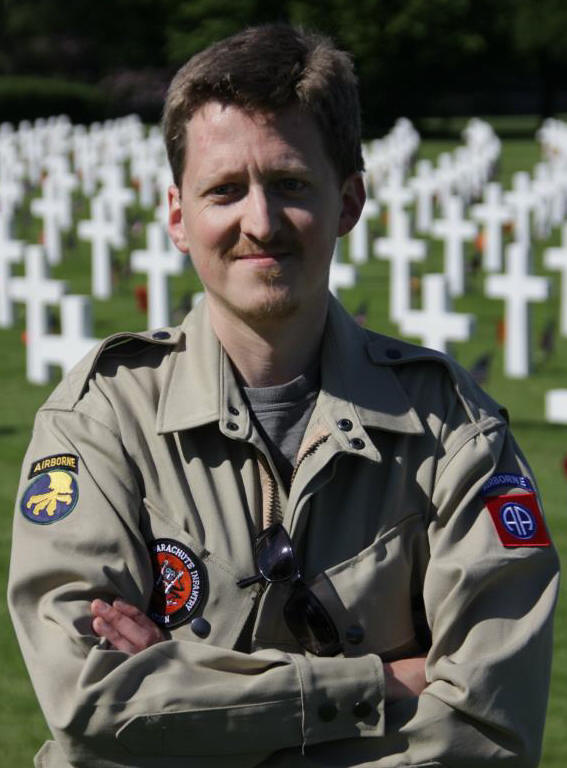 I am Xavier Van Daele, but my friends call me Xav.

Of course, I am fond of World War II.

I am a Drawer architect for the firm of Assar in Brussels.

Why the Us Airborne?

Since my childhood, I have always been interested in War World II. I watched again and again movies such as "The Longest Day", "Remagen", etc....

My dad passed me on his passion. Moreover he was a Belgian paratrooper!

Furthermore, my godfathr was born on June 6, 1964. One might think it a bit silly, but he was proud to say he was born on "D-Day".  He was a huge fan of the paratroopers.

He would say: "These men  had the "balls" to jump behind enemy lines in the dark of the night".

Often times we would see the film The Longest Day.

Moreover, I watched "the longest day! " hundred of times with him.

After searching  the internet, I became aware that there was no website in french which featured this subject.  Certainly, there are sites of the 101st. Airborne (thanks to Bob!) and of  the 82nd Airborne, but none of the llth, 13th or 17th, nor none of the smaller airborne units.

Therefore it is my intention to rectify this by creating a website dedicated to the U.S. Airborne units.

-"The way we were: Colonel Ben Vandervoort" Michel de Trez

-"The way we were: Colonel Bob Piper" Michel de trez

-"The way we were: Cpl Forrest Guth" Michel de trez

-"At the point of no return" Michel de trez

There are quite a lot of thanks !!

The first one goes to Dominic Biello, the webmaster of ww2-airborne. My website wouldn’t exist without him.

The other thanks goes to my good friend Cédric Evrard!

Thanks to him, the Equipement and Material parts wouldn't exist...

A Big thanks for Célia, Hélène, William, Daniel for your precious help for translation!

Thanks to Loïc and Jo for your help in the part "Hall of Honor"!

Some other thanks for:

Prosper (the webmaster of freebelgians)