The first operational jumps of the 82nd Airborne in North Africa and in Sicily (July 43) resulted in heavy losses mainly due to airdrops that were too scattered or too far from the planned DZs (Drop Zone).

In order to prevent this from happening again, it was decided to establish teams of pathfinders, dropped on the DZs in order to reconnoiter them and to mark them ahead of the main airdrops.

To help them, some new equipment were designed. The transmitter beacon “EUREKA” (AN/PPN-1A), paired with a receiver installed on a C-47 and called “REBECCA”, had to improve the progress of the operations.

It is in February 1944, on the new airfield at North Withman, England, that the IX Troop Carrier Command Pathfinder School was established. There, Lieutenant-Colonel Joel Crouch of the Army Air Force was the commanding officer of the C-47 crews, veterans of the recent operations in Italy.

Each battalion of the three regiments of the 82nd and 101st was to select the men who would be trained at North Witham to learn how to mark DZs. These men would number 300.

The men were indeed designated and few had volunteered. At that time, the image of the pathfinders did not have yet its elitist reputation, which explained the low number of volunteers for this specialty. The few who actually volunteered did it to obtain a promotion. Others were transferred because of disciplinary issues.

Each team of pathfinders was assigned a C-47 and its specific crew. They all train and live together. The paratroopers were taught the principles of aerial navigation, some pilots received their parachutist badges.

The paratroopers of these units would jump 5 to 7 times a week, including at least two times at night. The men received meals rich in calories to reinforce their night vision.

In May 44, the unit was composed of 18 teams, three for each DZ. This number allowed to complete the mission even if two teams out of three were to put out of action, the third team would always be able to mark the DZ and welcome the main body of paratroopers. It would not always be the case!

The set-up of beacons on DZ

The « EUREKA » beacon was designed by the British and manufactured by the US Army specially for D-Day. This device had been kept secret until then. Its operating principle is based on the exchange of radio waves between the aircraft fitted with the “REBECCA” receiver and the transmitter. These radio waves guide the aircraft accurately towards the drop zone. They are sent only if the aircraft receives the interrogation impulses according to a secret code that only it knows. The beacon is then used as a simple vocal transmitter-receiver between the aircraft crew and the troops on the ground with the capability to send short messages in Morse code.

The beacon was fitted with a self-destruct charge to prevent it from being used by the enemy if captured. The beacon was packaged in an oilskin carrying bag designed by the Independent Paratroops Company of the 101st Airborne in England. The bag was closed with a zipper. On the outside, a pocket was used to store the telescopic antenna of 3.50 meters when fully deployed. For the jump the bag was attached to the front parachute. It could also be carried on one’s back. The beacon’s total weight was 12.50 kg including the bag and harnesses.

Only the leader of the aircraft formation would be fitted with a “REBECCA” receiver. The other planes would use standard calculation to verify distance and time to arrival over the target. 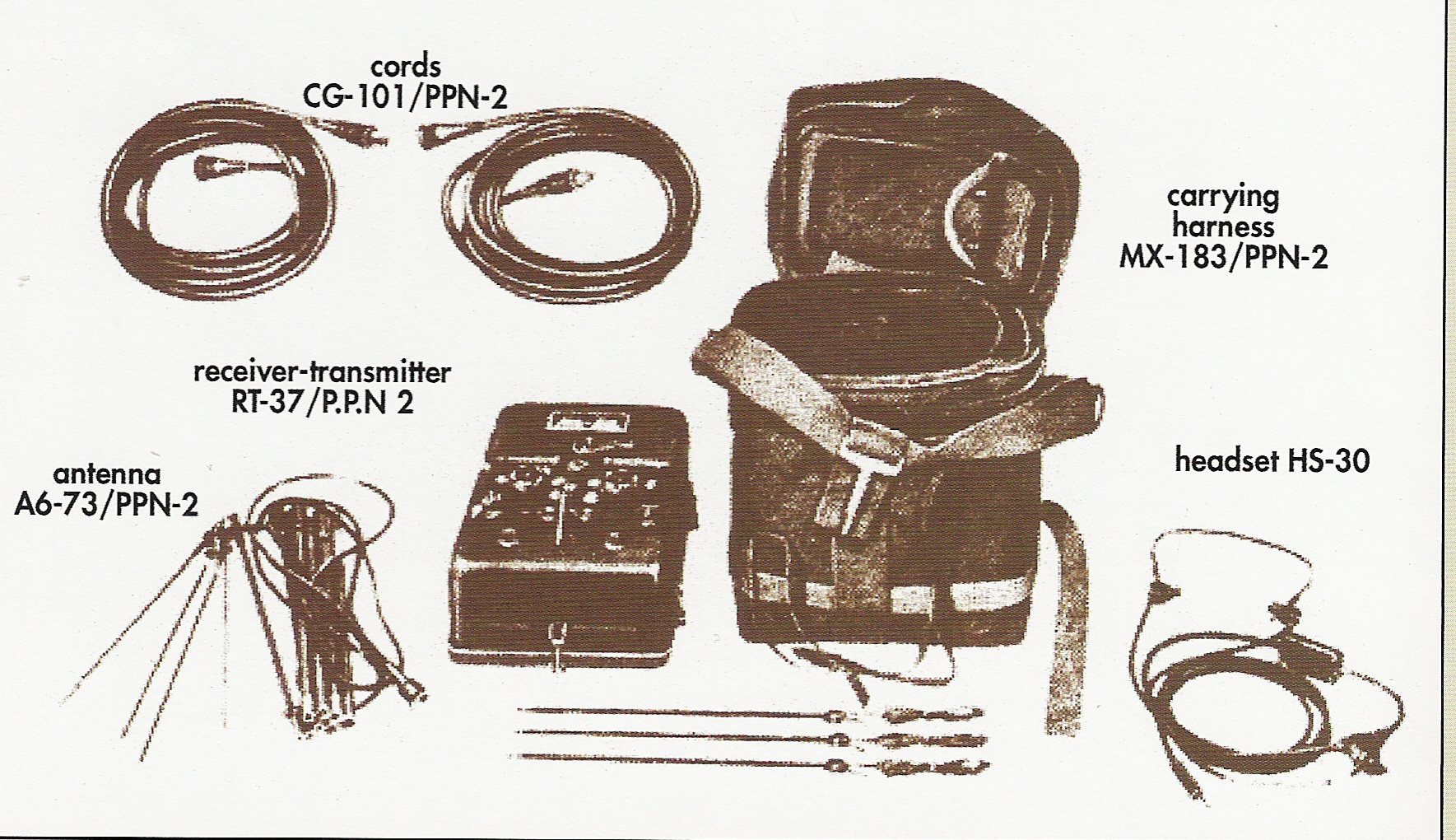 Another beacon called “BUPS” was also designed for the Pathfinders by the British. It was used as a navigation aid  and focal point for the whole division. Therefore, all aircraft that had lost their bearings would have to use it before dropping their sticks.

This beacon was composed of a module, mounted on a telescopic antenna, sending ultra high frequency (UHF) radio waves. It was paired with a SCR-717-C radio. For the jump the antenna was folded in an oilskin bag attached to the front parachute and to one of the paratrooper’s legs.

Another device was also used to mark a DZ: the holophane lights.

- In a night jump four Pathfinders would each carry two holophane lights called Aldis lights. 7 lights would be positioned on the ground to form a “T”. The stem of the T would indicate the direction of the jump and the top bar would show the arrival point.

The lights would be turned on when the roar of the engines of the leading aircraft could be heard. Each light would be mounted on a telescopic tripod so as to be easily visible from an airplane but quasi-invisible from the ground.

The holophane lights would be stored in B3 boxes.

The tail light, located at the bottom of the “T”, would be activated by an operator holding a calculator to make the light blink so as to form the letter of the DZ in Morse code, thus, helping the various leading aircraft find their respective DZs. These DZs would be marked with different colors e.g. green for DZ “O” (505th PIR), red for DZ “T” (507th PIR), ...

- For a daylight jump the Pathfinders would use orange phosphorescent panels, orange smoke grenades and a beacon simultaneously.

It was in May 1944 that a distinctive patch was created for the Pathfinders (for both the C-47 pilots and the paratroopers). The “winged torch” drawn by Lt. Prescott (a C-47 navigator) was approved by Lt.-Col. Crouch, the Pathfinder’s boss.

The patch was immediately launched into production at a craftsman’s shop in London.

The patch was first distributed on June 5, 1944, but for security reasons one was not allowed to carry it on his combat uniform. The technology used by the Pathfinders was indeed top-secret.

The patch was thus sown to the service uniform. It was placed on the left forearm of that uniform.