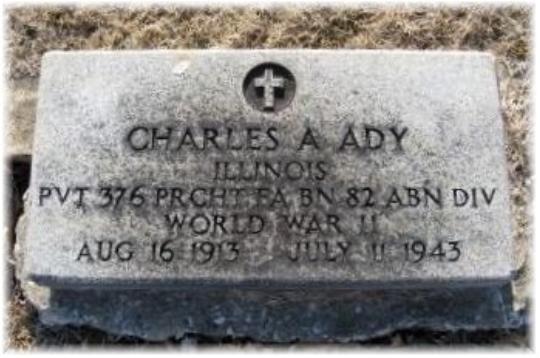 Charles A Ady, jr was born on August 16, 1913 to Collinsvle, Madison Co, Illinois. His parents, Charles and Anna have 7 children, 3 girls and 4 boys.

Charles Ady enlisted in the army on February 25, 1941, he stationed for some time was Fort Rosekranz with a unit of coast artillery. As there was no action, he asked for his transferred to the paratroopers.

He trained to be a paratrooper at Fort Benning, Georgia. During his first jump, he fractured an ankle. Being restored, he finished his training and received his wings on January 1, 1942. He was assigned to the 376th Parachute Field Artillery Battalion of the 82nd Airborne.

His body rests in Saints Peter and Paul Catholic Cemetery.